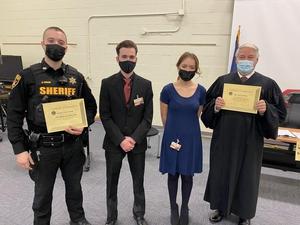 F. Donald Myers Education Center CTE Criminal Justice Studies (CJS) students held their annual mock trial on December 8 and 9, 2021. This case was NYS vs. Mike Mean "A Case of Murder."
The honorable David Mathis presided over the case with Deputy Cody Fabian (2015 graduate) with the Montgomery County Sheriff's Department returning as Court Officer.
CJS students participate in a yearly mock trial where each student plays a part as either a lawyer or witness. The trials are written so that a verdict can be either "guilty" or "not guilty" depending on how a team prepares and presents their case. This year it was a two-day trail where the morning and afternoon prosecution and defense were in the same class.
The simulation and role-playing experience allows students to discern hypothetical facts and practice trial skills. They develop public speaking and problem solving skills that greatly enhance their self confidence as well as learning teamwork, critical analysis, writing and beyond.
To continue the realism, a "real" judge presides over the trial; (David Mathis - who generously returns year after year to work with the students), while the jury is composed of students from other programs who volunteer during jury selection. Jury selection, was done via a student survey. Jury students came from programs such as welding, culinary, horticulture, cosmetology, exceptional learning, graphic arts and communication, HVAC/R, early childhood education and heavy equipment.

In November, students gathered for “Discovery Day” where they presented their evidence to the other side as guest speaker Benjamin Farstad, J.D. decided if it would be allowed to proceed to the Mock Trial. Mr. Farstad is an attorney with Martin, Harding & Mazzotti, LLP and devoted the day discussing the career field of law and helped the students with their case.

CJS Alumni, Clarisa S. Gentile, ESQ. of CSG Law Firm, spent quality time the week before the case, with both the defense and prosecution teams separately, to advise them and answer their many questions on how they could win their case.

David Foldi, Criminal Justice Studies Instructor said of the Mock Trial, “CJS students have the opportunity to gain first-hand knowledge of civil/criminal law and courtroom procedures by working on our yearly Mock Trial project. They learn so much, all while having fun, working with their team and building confidence in themselves.”
Madison Fromma, a Junior from Saratoga Springs High said of the value this project brings, “I came in here [to the trial] thinking that I'd want to join something specific such as law enforcement or FBI in the future. However, I’m leaving here with the idea of going into either politics or law because this class has changed my perspective on what exactly I’d like to do.”
Connor Meerdink, a senior at Ballston Spa High said of the trial, “this is a great opportunity to put ourselves out there and learn better speaking skills. We get to be very competitive, but at the end of the day we also have a lot of fun.”
The mock trial ended with the defendant, Mike Mean, being found “Not Guilty” of second degree murder in both classes. Students expressed how impressed they were with the “realism” of this project.
For more photos from the mock trials, visit the CJS Facebook page or the WSWHE BOCES Facebook page.